This post may contain compensated links. Read our disclaimer here

“When MI6 recognises his potential, Alex Rider is armed with secret gadgets and sent on his first mission. But the teenage spy soon finds himself in mortal danger.”

This is a guest book review by L. Cookson

So this article is about the Alex Rider book series by Anthony Horowitz. There are eleven books in the series so far.

My review will cover the first book, Stormbreaker. And if you like the sound of the Anthony Horowitz Alex Rider books, check out more information below, covering the whole Alex Rider series in order.

Contents hide
1 Alex Rider Stormbreaker book review
1.1 How old is Alex Rider?
1.2 How Alex’s adventures begin
1.3 What I liked about the book
1.4 Who would like this book
2 About the Alex Rider author – Anthony Horowitz
3 More information including Alex Rider reading order
3.1 The complete Alex Rider collection listed
3.2 Alex Rider book set … and further titles to be aware of
3.3 Alex Rider series order
3.4 Alex Rider graphic novels
4 Alex Rider film and TV series
5 Note on content
6 Over to you
7 If you liked this…

How old is Alex Rider?

In this book we are introduced to a fourteen year old boy named Alex. His mother and father both died in a plane crash when he was a baby, you might be thinking how did Alex survive?

Well the simplest thing – he had an ear infection so he couldn’t go on the flight.

So now Alex lives in Chelsea with his uncle Ian Rider and his house keeper Jack Starbright. His uncle is a bank manager and is never at home so Alex doesn’t know much about his job.

But one day Alex is surprised to hear that his uncle has died in a car crash and had not been wearing his seat belt at the time. But Alex knows better – his uncle never took his seat belt off whilst in the car. 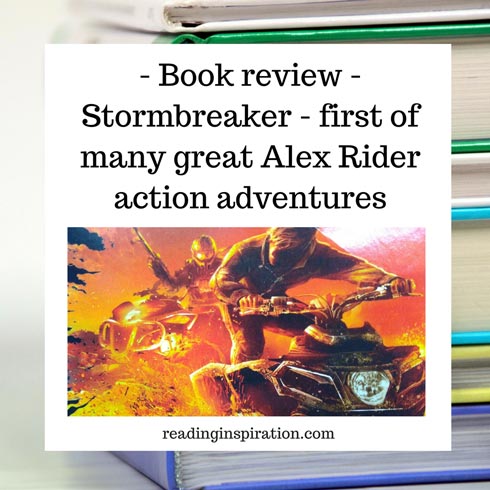 On the day of the funeral Alex meets the head of the bank his uncle worked for, Alan Blunt. He finds out the manager’s driver is carrying a gun. Alex then sees a truck outside his house.

Alex follows the truck to a car compactor. There he finds his uncle’s car and sees that it is riddled with bullet holes! After a daring escape from the car crusher Alex gets to show off his first grade Dan (black belt) karate skills.

The next day Alex gets an invitation to the bank at Liverpool Street. Alex is then kidnapped and the truth is revealed… his uncle had been a spy and had also been training Alex his whole life!

After a gruelling two weeks of training Alex is sent on his first mission to infiltrate Herod Sayle’s factory in Cornwall.

There Alex finds out who murdered his uncle and many more secrets. The story comes to an exciting finale including a dramatic scene at the Science Museum.

After a week of action, injury and pain, Alex realises that being a spy isn’t everything it’s cracked upped to be and vows never to work for M.I.6 again.

That didn’t work out so well did it?!

What I liked about the book

I really liked the action of the books, but it made me think about how it is not just fun and exciting being a spy, but it could really hurt you. It tells the story realistically about how Alex feels.

I recommend this book to kids who like spies and action, I think it would be best for 9-16 year olds.

As a child Anthony Horowitz always wanted to be a writer.

Anthony wrote Enter Frederic K. Bower which was published when he was just 22 years old. I read about this in a book I borrowed from the library about the author, Anthony Horowitz: Creator of Alex Rider.

There are lots more Anthony Horowitz books to read. Before he wrote Alex Rider, Anthony wrote Groosham Grange. I enjoyed this and some of his other funny books when I was a bit younger.

Later he wrote The Power of Five series. I’ve recently started reading these, they are a bit scarier and are all about dark magic, but they are really exciting and gripping. 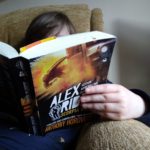 Get a copy of Stormbreaker here

How many Alex Rider books are there? Check our overview below to find out!

Alex Rider book set … and further titles to be aware of

The ten book set is a must for Alex Rider fans. But be aware that The Alex Rider collection does not end with the box set, and the series is not yet over!

Click here to see prices of the 10 book collection

Horowitz initially intended to end the series after the tenth book, Russian Roulette.

However, he then revisited the character in a collection of Alex Rider short stories – these were compiled and published as Secret Weapon.

Horowitz was inspired by working on the short stories to write two more books to continue Alex’s adventure. Never Say Die was the eleventh book in the series and will be followed by Nightshade, to be released in 2020.

The first five Alex Rider books are currently available in graphic novel format, the rest of the books in the series are expected to be adapted in the future.

Some young readers will find a graphic novel a more accessible way to get into books and reading. Reading a graphic novel can be exciting and engaging and can really help boost reading confidence.

Reading the graphic novels can also be a great way to reconnect with the stories and characters for those who have previously read the original books.

Toothy read the books first and then later enjoyed recapping the story and admiring the artwork of Alex’s story in graphic novels.

While the first five Alex Rider graphic novels are available now, a release date is yet to be confirmed for the sixth book, Ark Angel, to be released in graphic novel form.

The first five books adapted as graphic novels are available individually, but the box set of all five is great value.

Find out more about Antony Johnston, the writer who adapted the novels to a comic book format here.

A film of Stormbreaker was made in 2006. We enjoyed watching Alex Rider’s adventures on screen. The film had a great cast, including Ewan McGregor as Alex’s uncle Ian.

Although there were plans to make movies of the whole book series, the film was not a big hit, so no more were made.

However an Alex Rider TV series is currently in the works, so we are eagerly waiting for a release date to be confirmed!

Parents should be aware that as an action-packed adventure Stormbreaker and the other books in the series do contain violence.

However, the realistic depiction of violence as extremely damaging helps the reader to understand its negative impacts.

As with all books, age ratings can be flexible, the Alex Rider books age recommendation is broad depending on children’s reading level and interest level. We think the books are most suitable for age 9+ and can be enjoyed by older children and young adults too.

What are your favourite children’s action books?

Toothy and I would love to hear your views in the comments below. If you are looking for great middle-grade fiction check out more books here.

If you liked this…

If your children love the heroic adventures of Alex Rider books they may also be interested in hero stories. Check out our Marvel heroes books and gift guide here.

If you comment on this website your email address will not be published. Additionally, your comment data is never used for marketing purposes. Required fields are marked *

Disclaimer: As an Amazon Associate I earn from qualifying purchases.

A selection of the best Christmas books for preschoolers

Angela is the kind of parent who wants to discuss the latest hero movie or middle-grade book series on the school run. She grew up on the Lord of the Rings books and has a background in education & publishing. She believes all children & young people can enjoy wonderful story-telling and loves sharing ideas with others. 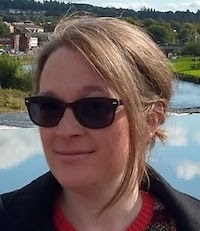 Hi, my name is Angela Stapleford. I'm a parent and I've worked with children & young people. I believe everyone can enjoy wonderful story-telling. I've created this blog to provide a resource for sci-fi, fantasy & adventure-loving families. You can find awesome stuff to entertain & inspire the whole family here.

The best Marvel LEGO sets kids & fans will love
4 Tips to help your kids enjoy Shakespeare
The Skulduggery Pleasant book order – a complete guide
Talking about dementia with the author of I Love My Grandpa
Excelsior! Find awesome books & gifts for Marvel fans

JOIN TODAY
This website stores data such as cookies to enable important site functionality including analytics, targeting, and advert personalization. By remaining on this web site you indicate your consent. OkCookie policy